Something definitely happened at MODXpo 2010

I was terribly anxious for the inaugural MODXpo event in Dallas. I had not given a presentation in front of anyone since 2000, when I was a Knowledge Management Analyst for an Enterprise Portal startup called Viador. Back then I did training sessions for the Technical Field Agents, and I remember how much I hated giving presentations. In fact, I think that’s why I quit that job, because they had just informed me that would be my full time gig. But I digress.

Despite the anxiety, I was the one who needed to present xPDO, so I was going and I was presenting. Now, to even get to Dallas, I had to travel 11 hours from my home in Taos, New Mexico. I only recently moved to the Taos area, and my knowledge of the roads is, well, inadequate at best. And combined with Google Maps, life threatening at worst, as I found out Sunday morning shortly after 6am.

Driving up US 64 from Taos to Angel Fire for my first time was a little disorienting already; 25 mph switchbacks before 6am will definitely get the adrenaline pumping. Wide awake and arriving in Angel Fire, Google directed me to head South. I missed the turn and pulled a U-turn; I wish I had not done so now, but hindsight and all that. Anyway, I got back on course and shortly outside of Angel Fire I was directed to take New Mexico 120, which showed it would connect me to I25 at Wagon Mound. Great, there’s 120; we’re off for Dallas.

Not so fast. A couple of miles in something went horribly wrong. In addition to the numerous Elk nervously jumping the fences as I approached them, a sign caught my attention. It basically declared that for the next 9 miles there would be steep inclines and switchbacks, and that the road was not recommended for trucks or travel trailers. Hmmm. Ok, I should be fine, I thought. A couple more miles went by and suddenly the pavement ended. WTF! A dirt road with steep inclines and switchbacks, and huge potholes and crevices from the recent snow melt. I should have turned around, but after counting some 40+ Elk, way more than 9 mile markers, and really wishing I had worn an adult diaper that morning, I made it back to paved road, though hardly maintained.

Many miles and several hours later, I was pulling up to the Renaissance Hotel in Richardson, Texas. I found the room, put my stuff away, and shortly thereafter back down in the lobby I met Shaun McCormick for the first time in the many years we’ve worked and collaborated together online. I suggested I make a sign that said Ditto Sucked which I could hold up in the lobby; the arriving attendees would certainly know who I was that way. But we went to the bar instead, where I enjoyed some quesadillas and killed the tension from the drive with some whiskey and a wheat beer with an orange slice. Everyone slowly began arriving and the introductions began.

Meeting everyone the night before put most of the nervousness at ease for me. It felt absolutely amazing getting to physically meet the people I had been collaborating with for many months, and in some cases years. Everyone enjoyed breakfast and Ryan kicked us off with a State of MODX presentation.

After the morning presentations wrapped up, everyone headed for lunch and the impromptu discussions that kept my mind in high gear for the next several days began, and spread like wildfire. Once begun, they were non-stop for the remainder of the conference; at breakfast, lunch, dinner, over drinks in the evening, in between sessions. And they were as varied as were the people who attended the conference. It was really indescribable the value this provided to us as the core team behind MODX, providing intimations into the questions and concerns of the generally silent majority that use MODX day-to-day.

The highlight of the first day’s presentations though, was from Dell. Having them reveal how they have been using MODX to develop a faceted navigation strategy for their web sites was amazing. Though not all the afternoon sessions went as smoothly, the hiccups were handled professionally and with a sense of humor only a room full of geeks could muster.

Overall, the first day got everyone properly excited and perhaps somewhat anxious for what was coming. Could the first MODXpo deliver enough to make it worthwhile for the attendees? It was starting to look that way.

Day one wrapped up with a Happy Hour, where I enjoyed a couple of glasses of Merlot, along with some international and domestic cheese and crackers, and continued the various conversations that had begun the first day. In particular, everyone got a direct look into the MODX core team, that we were real people, with real challenges in front of us to keep the momentum of MODX going by ourselves. If nothing else came out of the first day, this new connection between the attendees and the stewards of the tool they had been using for a while did. Too bad no one got a photo of me trying to smoke a cigarette in the 50 mph wind, dodging flying benches, and falling over the ash can/trash receptacle.

The second day of MODXpo started with Shaun and I talking about MODX Revolution and xPDO respectively. Other than the brain fragments we had to cleanup after my presentation on xPDO, I thought my presentation went alright. Not bad for someone who has a fear of speaking in public.

But the presentation by Josh Holmes of Microsoft provided the the most excitement of the day. Why was Microsoft sponsoring and presenting at the first MODXpo? The presentation answered the question very well and I think everyone in the room had to be at least a little impressed that a company once perceived as a hostile opponent of Open Source was doing so much to change both that perception and provide really innovative solutions to make the Microsoft platform a very compelling choice for deploying Open Source solutions like MODX.

I can’t forget the presentation by the Digital Butter duo though. The guys travelled all the way from Hong Kong to attend, and what they have done was very eye-opening. Shaun and I were both amazed at what they had already been achieving with MODX Revolution beta releases. We really had no idea, and we hope these guys will be willing and able to participate more actively in the community in the near future. I can’t thank them enough for coming to the conference and providing some strong validation for what Shaun, myself, and the rest of the MODX Team have been working so hard on for so long.

The final Q&A panel rounded out the final day of MODXpo. I don’t know if we answered everyone’s questions the way they wanted, but I think everyone that attended felt that they learned some important things about the history and future of MODX, as well as the people behind it.

As we were wrapping up the conference, Ryan decided to invite all of those from out of town that were not leaving that night to his home for a barbeque. This may have been my favorite part of the experience, getting to informally socialize with everyone was invaluable. And Ryan’s amazing redneck tech machinery cooked some incredible tenderloins, while his even more amazing wife and mother-in-law rounded out the great meal with asparagus, a rice, cheese, and chile casserole, and apple pies. I don’t know that future MODXpo’s will be able to repeat such moments, but I sure hope they can. 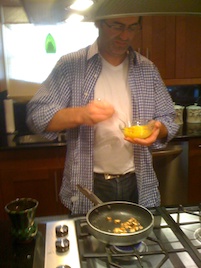 After staying up much later than I expected with Ryan, discussing what had just happened and finishing off the alcohol remaining from the evening’s activities, I woke up, consumed large quantities of Ryan’s coffee. Ryan made me a wonderful mushroom and cheese omelette to quell the sting of the hangover, and after a little more business and tomfoolery, I headed back home. The 11 hour return trip provided plenty of opportunity to contemplate the conference, and overall I felt it was more successful than I ever expected it would be. More importantly, I think it marked an important turning point in MODX history.

And I’ve rambled enough about the first MODXpo. Time to get back to getting MODX Revolution ready for general availability.

Co-founder and lead architect of MODX

For many years I have been discussing the modernization of the MODX core. And it is no secret that countless obstacles seem to continuously appear in my path as I attempt to make headway towards that goal. However, with the help of a dedicated team of contributors, a plan that has been formulated by a number of individuals ready to help move MODX forward, and a new official website for the community to keep track of our progress, it appears we will finally see the next major version of MODX come to fruition.

A discussion covering the question of persistence in the next releases of MODX and current progress on relevant initiatives.

What success MODX has achieved over the past ten years is, in my opinion, entirely due to two core tenets that the community has always stood behind. Those ideals are modularity and extensibility.

It’s been over 10 years since Ryan, Raymond, and myself founded the MODX CMS project and a lot has changed in the world of both content management and web development in that time.

JetBrains—the makers of IntelliJ IDEA—have unsurprisingly created the only PHP development environment worth paying for a license of.

Finding Your Way without Wayfinder

I knew there had to be a simple, efficient, and effective way to build nested menus using getResources instead of Wayfinder, and I finally figured out a way. With this discovery, I’ll likely never use Wayfinder again.

The Benefits of Using xPDO over Writing SQL

There are a number of benefits to using xPDO instead of writing SQL directly against the database.

A new feature in MODX 2.2 allows Elements to define if tags in default property and property set values are pre-processed. This allows values provided to Elements in this way to use tags in values that are processed before being used by the Element, the same way it would be if the tags appeared directly in the Element tag string.

In an effort to remove the dependency on Ant, the Java-based build tool we have been using to build, test, and produce distribution packages of MODX Revolution, I spent the last week learning Phing, refactoring the xPDO and MODX Revolution build processes to use it, and writing a custom Phing Task to handle our YUICompressor requirements.

I recently published a new Snippet for quickly caching the output of any MODX Element for a configurable amount of time. By default, it uses the Resource caching mechanism and stores it’s data uniquely by Resource, properties, and additional REQUEST parameters. So anytime the page is requested and the cache has expired, the Element will be processed fresh. And that’s just the simplest application…